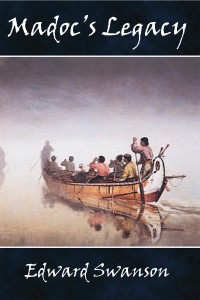 The American Midwest, 1847: After raining down justice upon a demonic hypnotist in St. Louis, former Manhattan Police Captain Alvord Rawn joins a trapping party bound for the uncharted depths of Upper Michigan’s wilderness. Journeying north from Chicago with his newfound companions, rugged mountain man Marcel Durand and Finnbar Fagan, an Irish writer, he anticipates a peaceful and much-needed vacation.     But Fate has different plans for him. For amidst those myth-haunted woods exists a deadly secret, one viciously guarded for centuries. The trapping party is entering upon a land festooned in reports of unsolved disappearances and unearthly pale-skinned sentinels known to the Chippewa Indians as copper gods. Copper gods grown wrath-ful as America’s Copper Boom brings mining men ever closer to their hallowed territory.

Edward Swanson is a twenty-six year old writer of historical thrillers. His first novel, Mesmer’s Disciple, was published when he was twenty-four. Having graduated college with a BA in History and a Minor in Art History, he now applies his research skills to the writing of fiction.