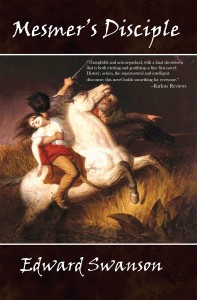 Forced to resign, Alvord agrees to help a wealthy society woman locate her missing son, the rising artist Charles Deas, who has been painting and exploring the frontier areas west of St. Louis. Deas has fallen under the spell of the mysterious Count Abendroth, a practitioner of mesmerism. Under the Count’s sinister occult guidance, Deas’s paintings have grown darker and more intense, verging on madness.

When Alvord arrives in St. Louis, he finds that Abendroth is much more than a charlatan, and that he is massing his dark powers for nefarious ends. Abendroth is unwilling to let Deas leave without a fight, which is just fine with former Police Captain Alvord Rawn, because fighting is what he does best.

As each side gathers soldiers for a final showdown, author Edward Swanson blends exacting period detail, old time story telling, and non-stop action into a satisfying climax of good versus evil.