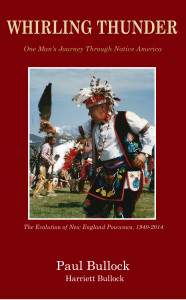 For half a century Paul Bullock and his family have been committed to raising awareness about the Native people of New England. Paul, known as Whirling Thunder, grew up in Bristol, Rhode Island and is of part Wampanoag ancestry. He came into the powwow scene as a boy in the 1940s, performing from the time he was 11 years old. By the late 1960s, when he and his six children had become the Paul Bullock family dancers, teaching dances and songs to others, they had made a decision that they would emphasize Eastern dance steps and etiquette at New England powwows.