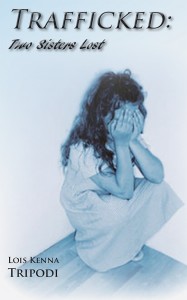 San Diego may be known as a place for its beautiful beaches, mild weather, and year-round outdoor lifestyle, but the FBI has also identified the city as a high intensity child prostitution area and a gateway for international human trafficking. Trafficked: Two Sisters Lost, is the story of two vulnerable young sisters, separated from each other, sexually exploited, suffering from inhumane living conditions, and confronted daily with physical and emotional abuse.

Erin, a part-time journalist with a weekly newspaper in the San Diego area, is assigned a task to write a series of articles about the brutal industry of human trafficking that, depending on the source, is the second or third most profitable criminal activity in the world. In doing so, she not only becomes aware of the magnitude of the problem, but becomes deeply involved in the efforts to rescue and reunite the two lost sisters.

Lois Kenna Tripodi graduated from Boston University with a degree in Sociology, is a Licensed Certified Social Worker, and has received alcoholism and drug substance abuse training from Rutgers University. She holds certificates from California and New Hampshire in “Domestic Violence Support Services” and from the University of New Hampshire in “Social Work Counseling”. In addition, she has participated in workshops at the Santa Barbara Writers Conference in Montecito, California.

A native-born New Hampshire resident, she has served in the NH House of Representatives, District 8, Hillsborough. In addition to supervising and counseling battered women in domestic violence support shelters, she was a member of the Oceanside, California, Crisis Intervention and Sexual Assault Response Team (SART).  She currently resides in New Hampshire with her husband.