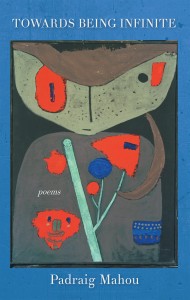 Though it comes to us in the form of a book, this first collection of poems by Padraig Mahou is perhaps best embraced as stone steps on a high mountain. Like a juggling monk climbing each one, Mahou’s excitement and handle with language creates a collection of dancing pieces filled with sight, recovery, love, and ecstasy. Look out from these poems and see the black steel of a bicycle flying through the air at night, a beheaded rooster in Maine, a half frozen lake with it’s confident fisherman, and an Amtrak train traveling through a California sunset. And with each thing seen, each landscape entered and left, we encounter the multitude of lives we can have in just one lifetime. That is enough to feel infinite with any set of steps we may climb.

“The great Japanese master, Basho, said that the thing inside him that wrote his poems was “a windswept spirit.” He would have recognized the same in Patrick Mahoney’s work (albeit with a slight Irish accent). His poetry moves me, with its sense of someone standing perfectly poised at the edge of a great seaside cliff, looking out over vast distances of sea and land, watching with calm clarity the movement of seasons and people, loved ones and strangers alike.” –David Rivard

Originally from New Jersey and having lived in Boston, Cambridge and San Francisco,
Padraig Mahou is a graduate of the MFA program at the University of New Hampshire. After
recovering from a cycling accident (2010) which led to a traumatic brain injury (TBI) he returned
to school and interned and volunteered at the Krempels Center in Portsmouth, New Hampshire.
He plans at working in art therapy in the future. He currently spends his time living between
Maine, Boston, and Cambridge.