This is the Day We’ve Been Waiting for 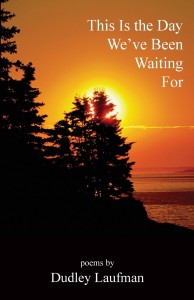 At age 86, Dudley is still fully engaged in a 65-year career as a dance caller for local country dances throughout New England. He plays his melodeon, harmonica and sometimes, when his fingers allow, his fiddle, at old town halls, farmer’s markets, folk festivals, weddings, barn dances, kitchen junkets and for the Canterbury morris dance team. On occasion, he is hired by elementary schools to teach old-time dances for children, a personal favorite for Dudley.
In 2009, Dudley received our country’s highest honor in the folk arts for preserving traditional New England dance and music. He received an award as a National Heritage Fellow from the Smithsonian Institution in Washington, DC. Along with an impressive list of published poetry books, Dudley has also recorded several LPs and CDs of traditional New England dance music with the group of musicians he formed in the 1970s called the “Canterbury Country Dance Orchestra.” There have been two documentaries produced about Dudley’s life and work: “The Other Way Back” (2009) and “Welcome Here Again” (2017). A play written about Dudley will be premiered in September 2017 in the Monadnock Region of New Hampshire titled “The Dancing Master of Canterbury.”