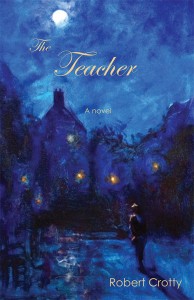 A moving novel of a conﬂicted everyman in 1950s America. The story describes the personal and professional conﬂicts of quirky members of a large second and third generation Irish clan of primarily educators.  Caring relatives are supportive in difﬁcult times while contributing to the small plot twists of daily life. Written by a talented writer with a rich ear for dialogue who magically relates the experiences and perspectives of a variety of family members, speaking in their voices.  Based in part on the author’s experiences growing up in Somerville, Massachusetts, this is a ﬁctional work of great range and strength in which readers may ﬁnd echoes of their own lives and family relationships.

Robert Crotty (1937-2011) was a student of human nature as he saw it who wrote largely (though not exclusively) from a New England perspective. He received a M.F.A. in English from the Iowa Writers’ Workshop during the Raymond Carver years. He also attended the graduate journalism program at the University of Missouri at Columbia.  At one point he was a reporter and editor of a Maine newspaper. There were other positions:  professor, dean of a college and director of the American Civil Liberties Union of Maine among them. As a Mainer at heart he wrote mostly from Kennebunkport where he and his family lived and later from Portsmouth, New Hampshire where he worked for a time and acted in stage plays.