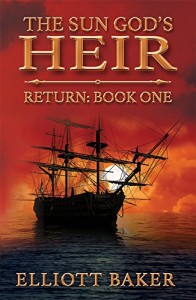 For three thousand years a hatred burns. In seventeenth century France two souls incarnate, one born the child of a prosperous merchant, the other, determined to continue a brutal incarnation begun long ago.

In ancient Egypt, there were two brothers, disciples of the pharaoh, Akhenaten. When the pharaoh died, the physician took the knowledge given and went to Greece to begin the mystery school. The general made a deal with the priests and became pharaoh. One remembers, one does not.

The year is 1671. René Gilbert’s destiny glints from the blade of a slashing rapier. The only way he can protect those he loves is to regain the power and knowledge of an ancient lifetime. From Bordeaux to Spain to Morocco, René is tested and with each turn of fate he gathers enemies and allies, slowly reclaiming the knowledge and power earned centuries ago. For three thousand years a secret sect has waited in Morocco.

After ages in darkness, Horemheb screams, “I am.” Using every dark art, he manages to maintain the life of the body he has bartered for. Only one life force in the world is powerful enough to allow him to remain within embodiment, perhaps forever. Determined to continue a reign of terror that once made the Nile run red, he grows stronger with each life taken.