The Echoes of Babylon 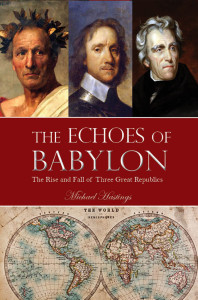 Twenty-eight centuries separate the birth of the Roman republic from the United States of America in the twenty-first century. To many it would seem that advances in technology and centuries of human experience would insulate our current society from the mistakes of the past.

The Echoes of Babylon examines the historical and social tendencies within the world’s three great republics. Perhaps not immediately recognized by many, the three republics have a shared experience, as the United States was a former British colony, and Great Britain was once subordinate to the Roman Empire.

Whereas history is sometimes considered a dull, dry affair or as an amalgamation of names and dates, in The Echoes of Babylon, history is presented in the context of sequential events, highlighting similar attempts in the direction of human affairs, which have led to similar fates within the world’s three greatest republics.