Deception of the Thrush 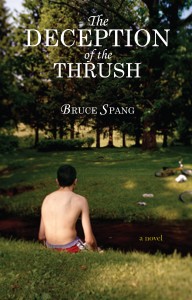 In 1964, Jason Follett is an athlete and a fraternity brother at his small-town college. He tries to seem like every other student, but he is hiding a secret that could destroy his hopes of fitting in-he is attracted to other men. After Jason is caught vandalizing another student’s room in an attempt to prove his masculinity, his repressed anger erupts and he gets into a violent fight with a friend. His days of being just another student on campus abruptly come to an end. Rejected by his classmates, Jason is drawn to the anti-war and civil rights movements. But even though he can stand up against war and racism, he still can’t stand up for himself.

As the nation is shattered by the horrors of the Vietnam War and the assassinations of Martin Luther King, Jr. and John F. Kennedy, Jason is torn: His parents want him to accept being drafted, but he doesn’t want to risk his life for the war he protests. With the possibility of being forced to fight looming over his head, Jason must choose whether to appease his parents or finally be true to who he really is.