Reclaiming Power: Building a Stronger Resistance in the Age of Trump 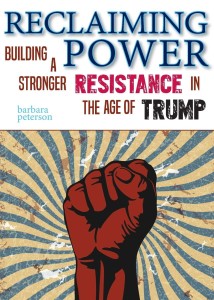 It’s time to reclaim our power!

This book shows how today’s Resistance can engage in full-scale, strategic acts of nonviolent noncompliance and other methods in order to force Trump and the GOP to either step down or radically alter their policies.

Authoritarianism is one of the biggest challenges facing people around the world today. The U.S. has joined this trend. Trump adulates dictators and criticizes democratic leaders. Our government is testing the limits of what its people will tolerate. Trump and his aides’ war on truth is dangerously close to creating an Orwellian “doublespeak” where citizens are being conditioned to accept the government’s version of reality over what they personally witness and experience.

This growing threat can no longer be tolerated. The Resistance must take immediate steps to force this train wreck oﬀ the tracks by following the steps outlined in this book. While our current Resistance has made and continues to make impressive gains, it must become far more organized to successfully defeat Trump and the increasing threat of authoritarianism in our country and around the globe.

No government can eﬀectively rule their country if the people refuse to comply with their demands. This book shows how today’s Resistance can engage in full-scale, strategic acts of nonviolent noncompliance and other methods in order to force Trump and the GOP to either step down or radically alter their policies. Drawing on theories of nonviolent action used by Gandhi, King, and Sharp, this book provides historical evidence and theoretical support to provide today’s Resistance with concrete practical advice in becoming far more eﬀ ective in ending crony capitalism, religious intolerance, white supremacy, and environmental destruction.

Barbara Peterson is a veteran activist for social justice. Some of her works includes joining NH Peace Action to combat nuclear proliferation, supporting AFSC’s fight for fair banking practices and their opposition to the death penalty, and working with local groups to protest the Iraq War. In graduate school, she became interested in the history, theories, and methods of nonviolent action written extensively about by Gene Sharp from the Albert Einstein Institute. Her doctoral work at UNH involved researching, writing, and publishing about peace education, and as a high school teacher, she created and taught a Peace Studies course. Since earning her Ph.D., she writes and publishes in the area of nonviolent citizen action, and she continues her work as an activist, joining several Resistance groups to protect democracy against the rise in oppression and authoritarianism.