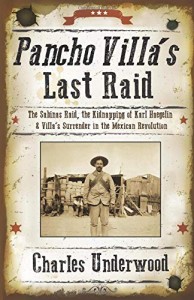 Mr. Karl “Kelly” Haegelin was the last person kidnapped by General Pancho Villa during the Mexican revolution. Karl Haegelin was an American beer meister who owned Sabinas Brewery, in Sabinas, Mexico. For over one hundred years details of the raid of Sabinas and kidnapping were only kept by Haegelin’s family. This work draws on eye witness accounts by Karl Haegelin and his family, numerous newspaper articles of the time which appeared in American and Mexican newspapers, and a U.S. Subcommittee Report to Congress regarding the attack on Sabinas provided by an informant on General Villa’s staff. 2020 marks the hundredth-year anniversary of Francisco Pancho Villa’s Raid on Sabinas. It’s the perfect time to have a book that accurately describes the historical events of General Villa’s last raid, the Haegelin kidnapping, and, finally, General Villa’s surrender.