Book One of the Harry Circus Series 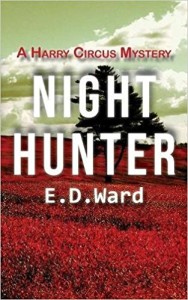 E.D. Ward’s first novel in the Harry Circus mystery series is a story of unforgettable suspense from the dramatic opening to the bloody finish. In rural Down East Maine, a seasoned State Trooper, Harry Circus, is driven to solve the most gruesome murder he’s ever investigated. The body of Lester Sawyer, local banker and good friend of Harry’s, is found disemboweled and partially skinned on the remote blueberry barrens, north of the small town of Berryville.

Tension mounts as Harry, with the help of his counterpart, Constable Ralph Bailey, follows the scent of the murderer to the brutal end where he discovers the long-kept secret of a mother and daughter.