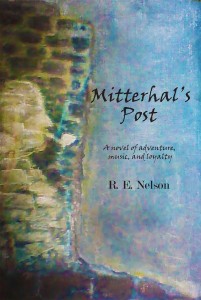 After returning victorious from war, Colonel Cornelius Mitterhal isolates himself from the society he liberated. Disheartened by guilt and sorrow, he slips into delusion and spends his days talking to the chimney on the rooftop of his manor house that overlooks a vast lake. But a new danger creeps up on the peaceful communities of Three Havens, as a deceitful chancellor plots to break the alliance Mitterhal forged with native tribes during the war.

Leaving his rooftop post, the canny colonel marshals unlikely troops for this new battle: Enyalda, the girl who spied on him for years from the branches of a beech tree, and her three brothers; the port city’s revered pastor; former soldiers who are only a little less war torn than he; a wily orphan boy; and a brutish smuggler. Through the grace of his mysterious heritage, Mitterhal has to retain his grip on these spinning threads and weave a tapestry that will restore honor to the land he loves.