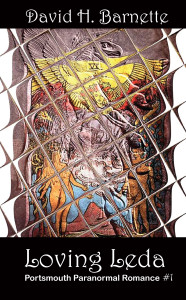 There have been three wars in Portsmouth, New Hampshire in the last thirty years, but everyone pretends nothing weird has ever happened here. No wars, no “Materialist Magicians” doing evil, and certainly no “elves” working to stop them. Divorced and finally working again after losing his last job, Jerry August just wants to live an ordinary life. He’s met a girl named Leda. She’s a friend of the elves, but Jerry’s willing to overlook that. Why, Jerry won-ders, does his wealthy Uncle Quincy want him to visit the pow-erful beings who rule a world that is not Earth? When Jerry refuses the Old Gods’ summons, their Myrmidon warriors kidnap Leda. Who else but Jerry can go to the other world to get her back? Who else but the elves can help him do it?