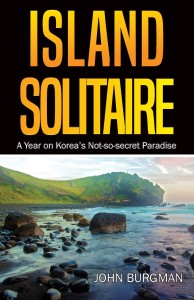 Island Solitaire is a journey into the pros, cons, and quirks of life on an exotic, distant island. With vivid descriptions and a penchant for diving head-on into history, author John Burgman chronicles a year spent on South Korea’s subtropical Jeju Island–a place packed with Buddhist temples, famous beaches, extravagant resorts, and a vibrant backpacker community.
Burgman also finds Jeju Island to be home to a mysterious “Fire Mountain Festival” that is purported to have near-supernatural effects, according to some locals. Anticipation of the festival leads Burgman to daily excursions around the island, nightly delights in food and culture, and frequent contact with the unfamiliar.
But Island Solitaire is more than just a personal tale of wide-eyed exploration and sunburned escapism. It is also an examination of how an entire region’s old-style past can coexist with its ultra-modern present. It is a gaze into a dual world of farmers and urbanites, unyielding elders and ambitious youths, on an island in the midst of change. It is a travelogue that touches on the intrigue of tradition and superstition, the allure of modernization and, ultimately, the universal desire for faraway adventure.