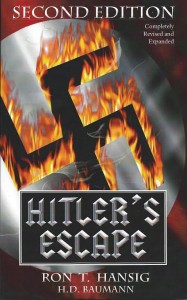 H. D. Baumann, an established author, exposes the rumors, politically-inspired falsehoods, criminal mischief, false leads, and conspiracies revolving around the last days of the most despised person of the twentieth century. His fascinating and cogent reconstruction of the closing scenes in the drama of the Third Reich gives us all the forensic detail needed to plant sufficient doubt in our minds that Trevor-Roper’s and other accounts of Hitler’s suicide may not be wholly accurate. He is also the author of History’s Secrets, The Vanished Life of Eva Braun, and Building Lean Companies.

Despite the historical consensus that Hitler killed himself at the end of World War II, there still linger many unanswered questions and doubts. In this well-researched book, Baumann, a survivor of World War II himself, paints a vivid picture of the last days of the German dictator Adolf Hitler, and provides answers to such compelling questions as: Was the Russian leader J. Stalin telling the truth when he told U.S. President Harry Truman and others that Hitler had escaped? Why was it that the Russians never found the corpses of Hitler or Eva Braun? If Hitler shot himself in the right temple (as is claimed), why do the Russians exhibit what is claimed to be Hitler’s cranium, showing a bullet hole in the back of his head-but actually belonged to a 30 year old woman? Why did the Russians refuse to allow the Western Allies to see Hitler’s presumed autopsy report? Why did the Russians exhibit the corpse of Hitler’s double, believing it to be the real thing? What was the reason for the disagreement between the Russian military intelligence (SMERSH) and the Russian secret state police (NKVD) regarding Hitler? For what reason did Hitler’s plane land in Barcelona, Spain, on April 27, 1945, three days before the alleged suicide? Why did three German submarines land at the coast of southern Argentina more than two months after the end of World War II?