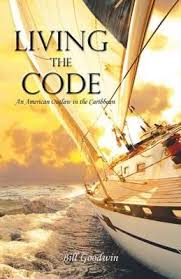 Reeling from a rough early childhood, Jack McCray is twice expelled from Catholic schools. Sent to a military academy, he develops a peculiar code of behavior that guides his unconventional and often violent life. Jack graduates from the academy at fourteen and sets out on his own. Bluffing his way into jobs from Maine to California, he touts horses at a racetrack, works on an oil rig, and chauffeurs an alcoholic widow from Mexico City to a motorcycle rally in New Hampshire. He becomes an explosives expert, and engineers projects for drug traffickers. With the law closing in, he flees to Central America. When a friend is threatened, Jack’s code demands retribution, and includes exacting the ultimate price. A fierce protector of those close to him, he’s a good guy to have your back.

A recovering corporate executive, Bill Goodwin is now a sailor who writes about the characters he meets in the international cruising community. He and his wife Susie divide their time between Maine and Central America.