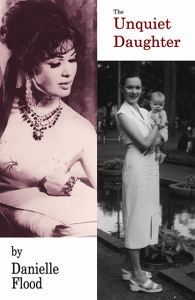 Danielle Flood, a journalist born of the wartime love triangle that inspired the one in Graham Greene’s The Quiet American, searches for her father after surviving a bizarre youth of privilege, estrangement and cruelty. As she yearns for her father’s love and presence, Danielle’s beautiful French and Vietnamese mother leaves her in burlesque house dressing rooms in the American Midwest, in convent schools in Long Island and Dublin, and with strangers in New York City. Meanwhile she lies to Danielle about their past for decades in this somtime-humorous near-tragic love story between a daughter and a mother and more. In the end we learn if Flood’s journey through the truth of what happened between her parents in early 1950’s Saigon satisfies her life-long quest for who she is.

“When I was 13 or so, the Vietnam War in full flower, reading Graham Greene’s The Quiet American let me appreciate fiction in a whole new way. Years later, Danielle Flood’s riveting memoir-cum-mystery-story has let me appreciate Greene and his novel – and the intersections of fiction and nonfiction – in new ways. Such a story! And so beautifully told.” – Kurt Andersen, novelist, host of the public radio show Studio 360

Danielle Flood was a staff reporter for the Associated Press (New York City); The Daily News (Tarrytown, N.Y.); The Standard-Star (New Rochelle, N.Y.); The Evening Sun (Baltimore); The Clearwater Sun (Florida); and The Miami News. Her freelance features were published in The New York Times and in many magazines including the (New York) Sunday News Magazine, New York, and Miami. She has an M.S. from the Graduate School of Journalism, Columbia University, and a B.A. from Fordham. She lives in Southern Maine with her husband, the artist, Jim Morin.Visit her website at www.danielleflood.com