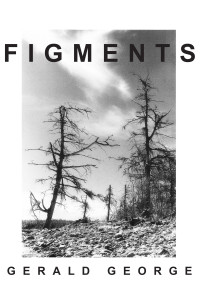 Webster’s Third describes a “figment” as “something made up, fabricated, or contrived.”

They began coming in the late summer or early fall of 2011. They continued coming, obsessively, through all of 2012 into February 2013. Some have said that deaths led to the Figments: a brother and my two closest friends of longstanding. That time stands unrelieved. But the deaths caused the Figments only by opening me more readily to questions they raise. What accounts for them are the way things are. They will not be “fixed” by “fixing” me.

These poems use no rhyme, rhythm, or conventional line breaks except in short, set-off segments. In these passages I take on attitudes that in the twenty-first century are no longer tenable. Otherwise the form of the Figments minimally arrests their flow, or promotes it. From this, I hope, they derive their force.