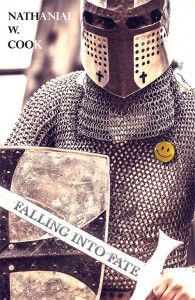 I’m not the same person I was when you last saw me. I’ve seen my first dead body – scads of them, in fact. You can’t gaze at a corpse, or at the faces of the bereaved, without feeling like your own problems don’t matter all that much. Dang – I got a bad grade on my paper. How tragic! Oh no! Melissa’s eyes glazed over when I started talking to her. It’s the end of the world! I also narrowly escaped getting hacked to death by a large sword. By a large person with a large sword. I even disarmed my opponent and prevailed in the fight. My last scuffle before this one was against Kenny Mahoney on the playground in third grade, and I most certainly did not prevail that time. Other than that, I grew a beard, shrank several inches, and turned into some sort of elf-like creature, all in one day. Like I said, not the same person … So how did I end up in another world? Me, of all people! I’m not Mr. Adventure … Mr. Excitement … Mr. Exploration. I’m Mr. Hide-Out-From-Parents-In- My-Room-With-Cookies-And-Soda-In-Front-Of-The-PC Guy. The only times I’ve ever swung swords were via pointing and clicking a mouse.