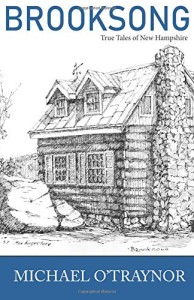 Richard Michael O’Traynor grew up as Dick Trainor in Greenland, NH. His grandfather changed the name from O’Traynor to Trainor in 1904 when he arrived in America from Ireland. Michael learned of the true family name as an adult and reclaimed it.After dropping out of seminary in Ottawa, Canada, Michael earned advanced degrees in philosophy. He settled in Ottawa; taught philosophy; built scores of dove-tail log cabins, including several homes for his family; acted in and directed plays; and hosted TV and radio programs. He loved to bring friends and family together for singing and celebrations. From 1990-1995, Michael wrote a weekly column for the New Hampshire Sunday News. Some of those columns are collected here. Hopefully, you’ll enjoy them as much as the many readers who followed the column during those years!