Before the Leaves Change Colors 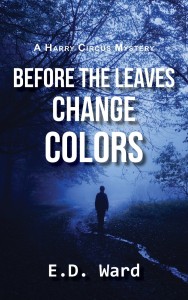 A murderer is at large in Maine’s Vacationland.

In this electrifying thriller, the third book in the Harry Circus Mystery Series, madman Zeke Brailey guns down a tourist for no apparent reason in the small town of Dells, Maine.  When Zeke begins baiting and trying to control his three friends – Petey, Dwight, and Pozy – they become fearful of Zeke as his behavior grows more and more bizarre.
When Zeke bullies his friend, Pozy, into joining him on a rampage of murderous violence, Pozy realizes how insane Zeke really is.  By that time, as an accomplice to a double murder, he’s dependent on Zeke to tell him what to do, and afraid Zeke will shoot him if he tries to leave.  But Zeke turns the tables on Pozy, disappearing and leaving him behind.
Seasoned State Trooper Harry Circus comes out of retirement to lead the turbulent murder investigation, and Pozy is arrested as an accomplice to murder.  Will Harry be able to outwit Zeke and save the town of Dells from more murderous mayhem?