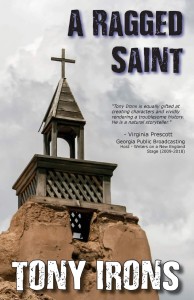 World’s collide, and unlikely alliances form when a 14-year-old girl, who has lived her entire life in one of Mexico’s infamous garbage dumps, becomes the key figure in a shady land deal involving a corrupt bishop. An unassuming priest searches for the girl, while a young American journalist searches for the truth.

Tony Irons was born at a Manhattan Project reservation in Richland, Wa., where plutonium was enriched for use in the H-bomb. When he was ten, his father died. His mother, a poet, moved the family of seven children to Exeter, New Hampshire.
Irons became one of the last self-taught architects in the country, becoming licensed in California in 1994. In 2000, he was awarded a Loeb Fellowship in the Graduate School of Design at Harvard University.
He lives in New Hampshire, with his wife Lee.